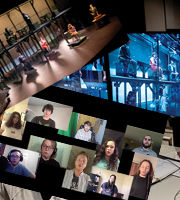 Finding ways to keep teaching, learning, and supporting one another during challenging times

The Penn State Harrisburg community has embodied the “We Are” spirit during the coronavirus pandemic, coming together in new and innovative ways inside and outside of the classroom, on campus, and in the community. Here are a few examples: 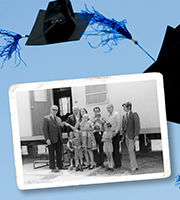 A commencement ceremony is often one of the most memorable days in a person’s life, not to mention quite an undertaking to orchestrate. Rarely does anything stand in the way of this important event. But three times in the history of Penn State Harrisburg, the college has been forced, by historic events, to cancel the official in-person commencement ceremony. 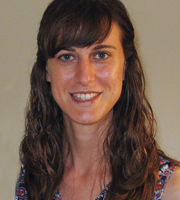 Jessica Sheets and her father, Ethan, have a lot in common. Both of their birthdays are in August, back-to-back in fact — hers Aug. 1, and his Aug. 2. They both grew up in southwestern Pennsylvania, both completed their studies at Penn State Harrisburg — and both had their commencement ceremonies preempted by historic events.

Penn State Harrisburg continues to enhance its degree offerings to meet students’ interests and workforce demands. Here’s a look at the most recent additions to the portfolio of bachelor’s degree programs.

Penn State Harrisburg alumnus Steven Overly and his wife, Donna, have made a $7.3 million estate commitment to Penn State that will establish the Overly Scholars Program at Penn State Harrisburg and in the Schreyer Honors College, creating full-tuition scholarships and enhanced educational experiences for high-achieving students.

The recipients of the college’s annual Alumni Achievement Awards include one graduate from each of the college’s five academic schools, who earned the accolade thanks to their outstanding professional accomplishments.

The Penn State Harrisburg Alumni Society announced the winners of its 2020 People to Watch Awards, graduates from each of the college’s schools who have made a significant contribution to the betterment of society through their personal and professional endeavors.

During the pandemic, Penn State has been doing what it can to support international students – including working with local organizations to coordinate help. This past summer, at Penn State Harrisburg, the efforts resulted in a group of local restaurant owners coming together to provide a little slice of home cooking, providing hundreds of meals to students at the Penn State Health Hershey Medical Center, Penn State Harrisburg, and Penn State York.

The Penn State Alumni Association recently named Penn State Harrisburg alumnus Gibran Jones, ‘08, the recipient of the 2020 K. David Weidner Diversity Award. The award is presented to an individual who has significantly contributed to fostering diversity at Penn State by sharing or volunteering his or her talent, time, and resources on behalf of the University.

Beginning in May 2020, the college alumni office took its popular Capital Connections programming on the virtual road. Capital Connections at Home, a series of live and archived webinars for alumni and friends, allows viewers to experience Penn State Harrisburg from the comfort of home. The series, which will continue through 2021, features Penn State Harrisburg faculty, staff, and alumni experts on a broad range of topics.

Researchers at Penn State Harrisburg’s Douglas W. Pollock Center for Addiction Outreach and Research have teamed with the Pennsylvania Department of Drug and Alcohol Programs and state and national non-profit organizations to lead a statewide campaign to reduce the stigma associated with Opioid Use Disorder.

With support from the Center for Survey Research at Penn State Harrisburg, researchers, led by Daniel Mallinson, collaborated to survey the attitudes of rural Pennsylvanians and how these attitudes affect their perspectives on issues relevant to state and local government, policymakers, and other stakeholders.

The dark side of organized labor

In 1949, International Ladies Garment Workers Union organizer William Lurye was stabbed to death in public by mob assassins. This event and its aftermath are at the center of “Murder in the Garment District: The Grip of Organized Crime and the Decline of Labor in the United States,” a new book by Catherine Rios, associate professor of humanities and communications, and David Witwer, professor of history and American studies. The book, named to The New York Times’ 2020 recommended summer reading list, delves into corruption, coercion and crime and its effects on American organized labor, as well as the country’s complicated relationship with organized labor.

Recent Penn State Harrisburg graduate students in environmental pollution control Rizki Prasetyaningtyas and Saskia Putri have spent time eating lots of bananas and oranges and collecting the peels. Their goal – to test whether fruit peels can be used to remove heavy metals from wastewater coming from textile mills.

Since the beginning of the COVID-19 pandemic, the Institute for State and Regional Affairs (ISRA) at Penn State Harrisburg has been analyzing various impacts of the coronavirus and its effects on Pennsylvanians in an effort to help inform policy and decision makers in the ongoing strategic planning response to the COVID-19 outbreak in Pennsylvania.

Although the spring 2020 season came to an early end due to COVID-19, the 2019-20 athletic campaign was one of the most successful in Penn State Harrisburg history. Teams reached new heights and student-athletes earned a plethora of individual awards and honors. Filled with incredible highs, record-breaking performances, and historic resolve in the wake of unprecedented circumstances, the 2019-20 athletic season will be remembered for years to come. Visit the Athletics website.