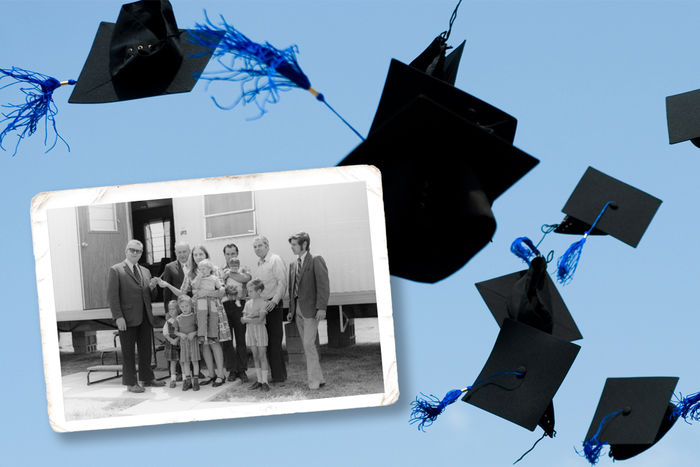 A commencement ceremony is often one of the most memorable days in a person’s life, not to mention quite an undertaking to orchestrate. Rarely does anything stand in the way of this important event. But three times in the history of Penn State Harrisburg, the college has been forced, by historic events, to cancel the official in-person commencement ceremony.

In 1972, when the ceremony was cancelled after Hurricane Agnes poured some 19 inches of rain on Central Pennsylvania in a two-day period and flooded much of the area, many seniors instead helped the nearly 1,000 people who fled their homes and sought shelter on campus. Trailers were set up in front of the Olmsted Building and 100 families lived there for months in what became known as “Flood Village.” Some students organized their own “rump ceremony,” as it was described, with several faculty members. In 1997, members of the Class of 1972 were invited to be officially recognized during that year’s commencement at the Hershey Theatre.

When the coronavirus pandemic forced Penn State to move to remote learning in March 2020, for the first time ever in University history, the commencement ceremony also was moved to a virtual format in response. The University-wide ceremonies – in spring of 2020 and in fall of 2020 – included undergraduate students at University Park and the Commonwealth Campuses, and all graduate students in the Graduate School who had their degrees conferred by University leadership via a virtual presentation.

The virtual ceremonies offered the opportunity of a unique gathering of a united Penn State family – where all graduates, their families, and friends from across the entire University – were able to join together to celebrate at once.