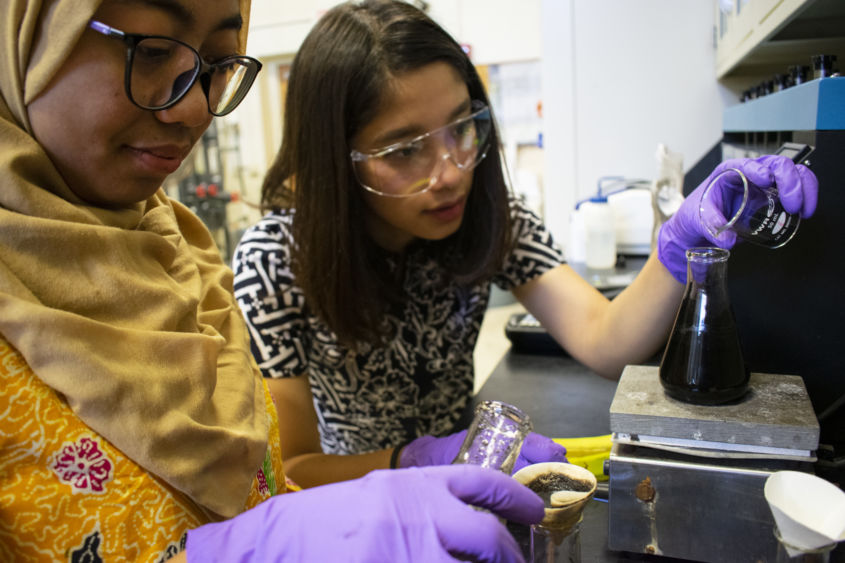 Graduate students in environmental pollution control Rizki Prasetyaningtyas, left, and Saskia Putri are testing whether fruit peels can be used to remove heavy metals from wastewater coming from textile mills like the ones in their native country Indonesia, which produces much of the world's textiles.

HARRISBURG, Pa. — Penn State Harrisburg graduate students in environmental pollution control Rizki Prasetyaningtyas and Saskia Putri have been eating lots of bananas and oranges. So have their classmates at Penn State Harrisburg, as well as all their friends and neighbors. They have made banana bread, banana pancakes and loads of slushies.

All this fruit consumption has a purpose. The two students, who are both from Indonesia, are testing whether fruit peels can be used to remove heavy metals from wastewater coming from textile mills. They didn't realize how many peels they would need to test their theory. 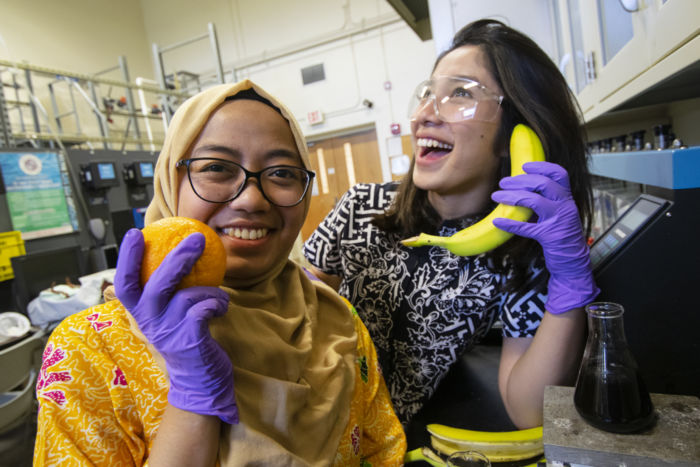 “We forced our classmates to eat them, and encouraged everybody we know to eat bananas and oranges,” Putri said.

Their work has garnered some attention, as well as healthy vitamin C for their colleagues. This past spring, they placed first in Penn State Harrisburg's research presentation competition and third in Penn State’s University-wide graduate exhibition. They presented their research at the Environmental and Water Resources Institute's World Environmental and Water Resources Congress in Pittsburgh, Pennsylvania, in May and at the Pennsylvania Water Environment Association in State College, Pennsylvania, in June.

Both women already had their undergraduate degrees in environmental engineering and were working at the Ministry of Public Works in Indonesia when they were awarded a full scholarship to study in the United States through USAID. They are the first to attend Penn State Harrisburg on a USAID grant. 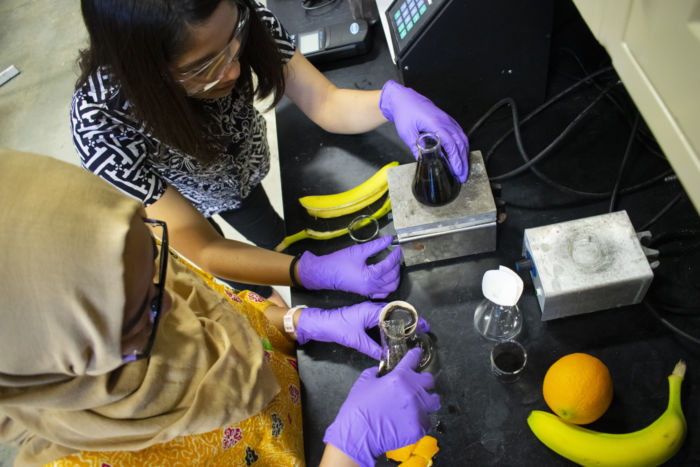 Rizki Prasetyaningtyas, left, and Saskia Putri, who were awarded full scholarships to study in the United States through USAID, said they chose Penn State Harrisburg because they were intrigued by the chance to join small classes with plenty of hands-on practice and research opportunities.

Indonesia produces much of the world's textiles, but their pollution controls are not very efficient, Putri said. They often use activated carbon to remove heavy metals, but that is expensive. Chromium, a carcinogen, is a particular problem.

At the same time, Indonesia grows many bananas and oranges, with the peels usually ending up in a landfill, she explained.

When mixed with a solution containing chromium in normal concentrations, the peels worked very well to absorb and bind to the metal. While some textile mills produce higher concentrations of chromium, most would fall within the range where the peels appear to work. Bananas worked better than oranges.

“The benefit is that we can operate with industries in Indonesia that now just dump their waste,” Putri said.

The students found that when mixed with a solution containing chromium in normal concentrations, the peels worked very well to absorb and bind to the metal. The found that bananas worked better than oranges.

Their instructor, Farrah Moazeni, a part-time faculty member in civil engineering at Penn State Harrisburg, said the two students did the whole project on their own after reading pertinent literature.

“Seeing and doing it gives a whole other level of education,” Moazeni said. “If it gets into mass production, it could make their industries more efficient. Right now there is no economic yet effective solution for removing chromium.”

The two researchers have now moved on to testing the use of fruit peels to remove other chemicals in wastewater, including zinc and copper, two common heavy metals discharged by industries such as textile manufacturers. Although the project is ongoing, it is noted that the peels so far have been working effectively to absorb zinc and copper in the wastewater.

Moazeni said she likes the sustainability of their solution. “It’s using waste to remove waste,” she said.