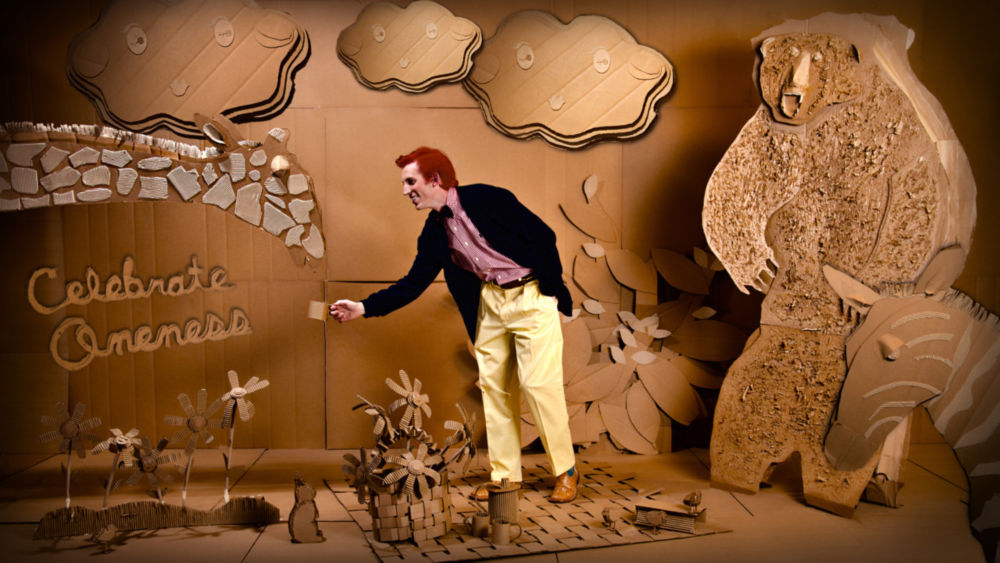 Advanced Graphic Design students tackled hundreds of pounds of cardboard as part of a class project that ended up getting them an invitation to display their work at Lincoln Center in New York.

“That was our literal thought,” said senior Marques Paige with a laugh. “It was more about what we would be using that made us think, ‘Is he serious?’”

Welsh, assistant professor of communications, announced to students in his spring 2012 Advanced Graphic Design class that they would complete a design project strictly using cardboard and glue — in three weeks.

“We were kind of like, ‘Wow, this is never gonna work out,’” said Kristen Hepler, who graduated in May with a degree in communications.

Not only would the class project be graded, but it would be entered into the worldwide Your ONEderful World Design Contest organized by The One Club, a New York-based nonprofit that promotes excellence in advertising and design.

The contest provided a series of images to be manipulated in any way contestants saw fit to best exemplify the theme “Celebrate ONEness.” Images to be part of the entry included several animals — a bear, a giraffe, a zebra. “The art direction of that whole campaign includes these kinds of fantastic, imaginative scenes of photography,” Welsh explained. “A series of animals that were stylized. The club posted photos (and) anyone could download and create their own version.”

He added: “Everyone but our class created some Photoshopped version of them.”

Welsh said he didn’t feel that yet another Photoshop project would sufficiently challenge the class of 21 students. Instead, he wanted something unexpected.

“If they have to work with material or a process that’s unfamiliar, it requires them to pause and consider and evaluate and think through — all those critical-thinking skills,” he explained. “Simply downloading a Photoshop file from Facebook and applying filters … they already do that pretty regularly.”

For students who likely will become the brand and account managers of the world — positions that oversee graphic designers — Welsh said there was more value in the students understanding “the thought process of design than the making of design.”

When Welsh announced the project, “we thought it might be impossible,” Paige said.

The first order of business was breaking up into groups, each tasked with a job — acquiring raw materials, scouting the appropriate location to build, choosing the best place for photographs, and physically creating the piece.

Not everybody knew each other in the class, Paige said. But after the students began working, they saw the project coming together.

“It flowed really well,” he added. “We actually surprised ourselves at the amount of teamwork that occurred.”

Paige was in the group responsible for photography and video.

“We took pictures and sound, and used that for promotion in social media,” he said.

The group created a Tumblr blog, where photos and videos documented the project’s creation. “We were the only participants who had extra social-media aspects, as far as behind the scenes,” he noted of the contest entries.

Hepler, meanwhile, was in the group responsible for attaining materials. Although there weren’t many to acquire — cardboard, wood glue, cardboard cutters — transporting several hundred pounds of cardboard required special consideration.

“I had to borrow my dad’s truck,” Hepler said.

Finally, creation of the project started to take shape. The final creation used about 500 lbs. of cardboard. The 7-foot-tall bear, alone, weighed more than 100 lbs. with multiple layers and a base for it to freely stand.

“Their initial skepticism was quickly replaced by a feeling of enthusiasm, and they were all part of making something special,” Welsh said.

To win the contest, an entry had to garner the most likes on Facebook.

Despite more than 40 entries from around the globe, the students in Welsh’s class were confident their project had a shot at winning.

“Because we were the only entry to use physical material and (build) our project by hand, and because of our blogging and behind-the-scenes footage,” Paige explained. “We felt that gave us some leverage.”

[Local news media helped to spread the word, too.]

The project received more than 2,200 likes days before the deadline.

The winner would receive a round-trip airline ticket to New York, hotel accommodations, and a ticket to attend the prestigious One Show awards ceremony on May 10, 2012 at Lincoln Center’s Alice Tully Hall. There, the winning design would appear onscreen at the awards presentation.

In the contest’s last six hours, a Peruvian art director’s collage pulled ahead to win.

Paige conceded that he and his classmates started to “slack off” on social-media promotion once the winner began taking the lead.

But a week after the contest closed, the students received a surprise: a Facebook message from One Club Managing Director Emily Isovitsch. One Club employees still were buzzing about the cardboard project, and they wanted to have it on display during the One Show awards, she said.

“When we saw the students who went above and beyond … it was incredible,” Isovitsch said. “It seemed like it would be a great fit for the show. It was a fun idea to have them there for photo ops.”

She added: “It was the only entry that was not digital, from what I could tell.” The students transported the project in pieces via SUV to New York. There, they had roughly 30 minutes to direct Lincoln Center union workers to re-assemble the piece for display. Once assembled, numerous award-show attendees stopped by to get photographed with the piece, students said.

“Their résumés got padded pretty nicely with that,” Welsh said.

The piece had to be taken apart during the One Show awards, where Italian fashion model Fabio was a guest. Although students were disappointed Fabio did not pose with their project, they offered him cardboard flowers and had pictures taken with him.

Eight students made the trip to New York for several days during 2012 Creative Week NYC. They received free tickets to attend the week’s events and had assignments such as creating a video log of activities. They also availed themselves of networking opportunities, including a visit to publisher Condé Nast.

“When we saw the students, who went above and beyond … it was incredible. It seemed like [the cardboard scene] would be a great fit for the show.”

“[The students] were really great to work with and professional. I was surprised at how easily everything worked. It was really nice,” Isovitsch said.

“They were involved in some pretty high-end discussions about creative, about industry things happening that otherwise I don’t know that they would have had,” Welsh said. “They spent $200 on material and it got them nearly $10,000 of access to things in New York for the week.”

Those with whom they rubbed elbows included longtime Vogue magazine Editor-in-Chief Anna Wintour.

“The number of people we met was mind blowing,” said Cody Page, who graduated in May with a communications degree and now is a graduate student at New York University.

Both Hepler and Paige called  the experience “awesome.”

“It was very educational,” Hepler said. “I would do anything to do it again. It just happened so fast.”

Paige said the project taught him to take school assignments as work that he would “be proud to take out to the real world.”

A senior, Paige has a year-old photography-and-video business he plans to grow after graduation. Hepler, meanwhile, is in the midst of two internships. She hopes to turn one into a full-time job handling social media.

The lessons learned during the creation of the cardboard project, Welsh said, are ones the students won’t soon forget.

Page learned that sometimes, coming in second isn’t so bad. “This was even better (than winning),” he said, “because it was more than just a popularity contest.”