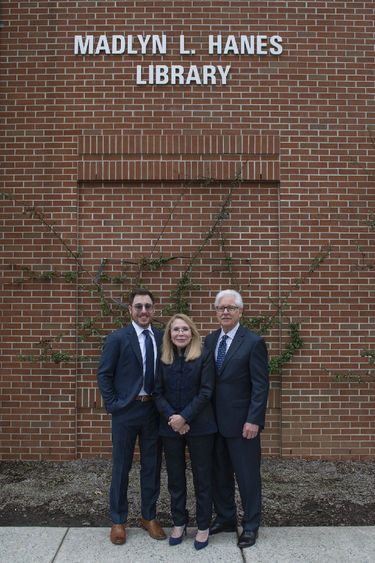 UNIVERSITY PARK, Pa. — On March 24, Penn State honored recently retired Senior Vice President for Commonwealth Campuses and Executive Chancellor Madlyn Hanes at a naming ceremony for the Madlyn L. Hanes Library at Penn State Harrisburg. Last summer, ahead of Hanes’ official retirement from a 33-year career at the University, the Penn State Board of Trustees announced the library’s name, which took effect on July 15, 2021.

The naming ceremony, hosted on-site at Penn State Harrisburg, was attended by University and campus leadership, including President Eric J. Barron, Vice Chair of the Board of Trustees David M. Kleppinger, and Harrisburg Chancellor John M. Mason, among other academic and community representatives.

“Penn State’s Commonwealth Campuses are at the very core of fulfilling the University’s land-grant mission and exist to support Penn State’s long-standing commitment to making higher education accessible and affordable,” said Barron. “Libraries play a similarly crucial role in society — providing a pathway to knowledge and lifelong learning. The Madlyn L. Hanes Library will give faculty and students the tools and access to explore the world. I’m delighted that Madlyn’s legacy will live on in perpetuity in the Madlyn L. Hanes Library at Penn State Harrisburg.”

“Madlyn’s commitment to the Commonwealth Campuses and Penn State has gone well beyond her formal roles and responsibilities,” added Kleppinger. “She has made Penn State her life’s work, and she has worked consistently to ensure that everyone in our institution understands the vital importance of our campuses across Pennsylvania.”

Hanes served as Penn State Harrisburg’s chancellor from 2000 to 2010 before her appointment as the chief academic and administrative leader of the University’s 20 Commonwealth Campuses. She has held a variety of senior leadership positions since arriving at the University in 1988, including serving as chief academic officer of Penn State Delaware County, now Penn State Brandywine, and as Penn State Great Valley’s chief executive officer and the founding head of its School of Graduate Professional Studies.

“Dr. Hanes has long been recognized as a champion for the Commonwealth Campuses, their students and communities,” said Mason. “Penn State Harrisburg was privileged to have her at the helm, guiding the college during a period of significant transformation and unprecedented growth. So it is appropriate that today we can recognize Dr. Hanes’ many contributions not only here at our campus but also throughout Pennsylvania. Hers is a legacy of service that will benefit generations to come.”

Under Hanes’ leadership, the Commonwealth Campuses, which enroll approximately 27,000 students, have added a significant number of high-demand baccalaureate degree programs to meet student and regional career needs, instituted a differentiated tuition structure to reflect the demographic circumstances of local regions and the resource needs of students, and developed new institutional partnerships and articulation agreements to increase admissions access. The campuses also have launched 21 innovation hubs that are helping to advance entrepreneurship and spark economic activity in communities across Pennsylvania; made significant investments in research, technology and facilities infrastructure; and substantially increased institutional student aid.

Hanes earned a bachelor of arts degree in English education, a master of arts degree in speech-language pathology, and a doctorate in curriculum and instruction, with a specialization in language and literacy development, all from the University of Florida. She also holds a Certificate of Clinical Competence in speech-language pathology from the Professional Services Board of the American Speech-Language-Hearing Association. In 2008, the University of Florida honored Hanes with its Distinguished Alumnus Award.

Hanes has served as a consultant to ministries of education and boards of higher education in Puerto Rico, Ecuador, Israel and Korea, and she was appointed to the University Council of Jamaica by the country’s prime minister. She served as a Policy Fellow in the U.S. Department of Education’s Office of Educational Research and Improvement and as a senior adviser to the chancellor of the University System of Georgia, where she oversaw the management review of its 34 institutions in conjunction with the governor’s policy office. She is past chair and a current member of the women’s network executive council of the American Council on Education, and she co-chaired the council’s “Moving the Needle: Advancing Women in Higher Education Administration” initiative. She also served on the board of directors and as vice chair of the Council for Higher Education Accreditation.

“The library at Penn State Harrisburg and I share history in the evolution of the college,” said Hanes. “It made its debut at the same time I made mine in 2000 as the incoming chancellor. The library building served as an anchor that not only helped define the core of campus, but it also began the campus’ complete physical transformation from a group of classroom buildings into the robust academic community it is today — a sense of place it long deserved to have. More than buildings, libraries are the heart of academic life and places to learn for learning’s sake. Having my name associated with the Penn State Harrisburg library — connecting me to the Capital College in perpetuity — is a deeply personal honor.”

The Madlyn L. Hanes Library, which encompasses three stories and 115,000 square feet, is an academic research library with 300,000 volumes and 1.3 million microforms. Following the naming announcement, Hanes and her husband, Michael L. Hanes, established the Madlyn L. Hanes and Michael L. Hanes Library Endowment, and supporters were invited to make gifts to the fund in Madlyn Hanes’ name. Those interested in supporting the endowment can contact Interim Director of Development and Alumni Relations for Penn State Harrisburg Noah Roufos-Abbey at [email protected].

Gifts to support the Madlyn L. Hanes and Michael L. Hanes Library Endowment will advance “A Greater Penn State for 21st Century Excellence,” a focused campaign that seeks to elevate Penn State’s position as a leading public university in a world defined by rapid change and global connections. With the support of alumni and friends, “A Greater Penn State” seeks to fulfill the three key imperatives of a 21st-century public university: keeping the doors to higher education open to hard-working students regardless of financial well-being; creating transformative experiences that go beyond the classroom; and impacting the world by serving communities and fueling discovery, innovation and entrepreneurship. To learn more about “A Greater Penn State for 21st Century Excellence,” visit greaterpennstate.psu.edu.