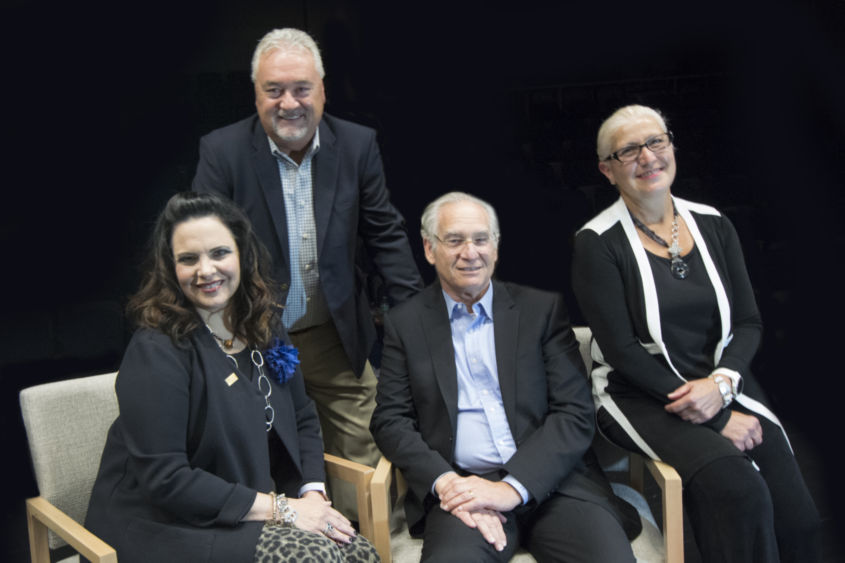 HARRISBURG, Pa. — Penn State Harrisburg recently presented Alumni Achievement Awards to one graduate of each of the five academic schools who demonstrates outstanding professional accomplishment. The awards were presented during a ceremony on campus on Sept. 21.

Stephen Guillard, honored by the School of Public Affairs, has had a distinguished 40-year career in senior level executive positions in the long-term care and post-acute sectors of healthcare. He is presently a consultant in these areas and sits on several boards of directors of healthcare related entities.

Previously, he served as executive vice president, chief operating officer and member of the board of directors of HCR ManorCare, an Ohio-based healthcare company until his retirement in 2012. Prior to joining HCR ManorCare, Guillard held executive positions with several organizations.

In 2013, Guillard was appointed by John Boehner, former speaker of the U.S. House of Representatives, to the National Long-Term Care Commission, a group of leaders who were responsible for developing recommendations to Congress on the future of long-term care services.

Currently, Guillard is a member of the board of directors of Medequities Realty Trust, a Nashville-based healthcare real estate investment trust. He is also an independent board member of Trilogy Health Services, a privately-held post-acute operator based in Louisville, Kentucky. Previously, he served on the boards of NaviHealth, Inc., a private equity-backed Tennessee-based managed care organization, and Health Management Associates, an owner-operator of more than 70 acute care hospitals nationwide.

Judy Hricak, the first person in the more than 100-year history of engineering firm Gannett Fleming to serve as chief communications officer, was recognized by the School of Humanities.

In her position, she is responsible for leading the planning, development, and implementation of the Gannett Fleming global corporate communications strategy. Hricak also serves as a senior counselor and coach to the executive team where she works in partnership with the director of organizational change management to develop and grow the change management competency and capabilities for multiple employee segments.

A champion of diversity and inclusion, Hricak co-founded and launched the award-winning employee resource group Connected Women at Gannett Fleming in 2017 with a mission to create a culture that empowers, supports, and mentors women to achieve career and personal success.

Her professional affiliations include the Society for Marketing Professional Services, and the American Council of Engineering Companies. She has been awarded the Tribute to Women of Excellence by the YWCA of Greater Harrisburg; Pennsylvania’s Best 50 Women in Business by the Pennsylvania Department of Community and Economic Development; the MS Leadership Class by the Central Pennsylvania Chapter of the National MS Society; and the Top 40 Under 40 Award by the Central Penn Business Journal.

His contributions have been invaluable in many high-profile initiatives, including PinnacleHealth’s affiliation with UPMC, the purchase of four hospitals in 2017, and the joint venture through which UPMC Pinnacle and Select Medical co-own the Helen M. Simpson Rehabilitation Hospital and more than 25 outpatient clinics throughout central Pennsylvania.

In 2014, Pugh led the team that won a national recognition from the Veterans’ Health Administration (VHA), and the Central Penn Business Journal recognized him as one of the top CFOs in the area. He has been named among the "150 Hospital, Health System CFOs to Know" by Becker's Hospital Review for two consecutive years.

Pugh serves on the board of directors of nine affiliated healthcare organizations and is a member of the UPMC Pinnacle Retirement Plan Board of Trustees and the UPMC Pinnacle System Finance Committee and Investment Committee. In addition, he serves on the Finance Committee of Hamilton Health, a Federally Qualified Health Center, and the boards of the Boys and Girls Club of Central Pennsylvania and the Capital Region Economic Development Corporation (CREDC). He also serves on the Penn State Harrisburg School of Business advisory board.

Prior to JEVS, he worked at the City of Philadelphia’s Area Manpower Planning Council, first as a manpower planner and then as director of planning and evaluation, responsible for annual manpower master plans and program evaluation. He served several terms on the board of directors of Philadelphia Works, Inc. and continues to sit on its Research and Policy Committee. He is also a member of the Greater Philadelphia Leadership Exchange of the Economy League of Greater Philadelphia.

Spector is the former president of the Jewish Communal Service Association of North America, a former president of the Association of Jewish Vocational Professionals, and a former vice president of the International Association of Jewish Vocational Services (IAJVS). He is a member of the Board of Directors of JPRO, a Jewish professional association serving North America. Locally, he served on the board of the Boys and Girls Clubs of Philadelphia, holding various leadership positions for more than two decades. He recently received the Extraordinary Leadership Award from the Network of Jewish Human Service Agencies. Additionally, he received the IAJVS Benjamin Loewenstein Award for Outstanding Professional of the Year and he received the IAJVS Bernie Rosenthal Award for Outstanding Leadership.

Susan Steele was honored by the School of Science, Engineering and Technology. She is a senior bridge erection engineer with High Steel Structures, LLC. She has been with the company since 2008 and serves as the engineer-in-charge for the construction of both steel and concrete bridge superstructures. Prior to that, she worked with High Concrete Group, and as a general contractor for 11 years, focusing on commercial and residential rehabilitation.

She continues to serve as a member of the Penn State Harrisburg Board of Advisers and on the advisory board for the college’s Structural Design and Construction Engineering Technology program.