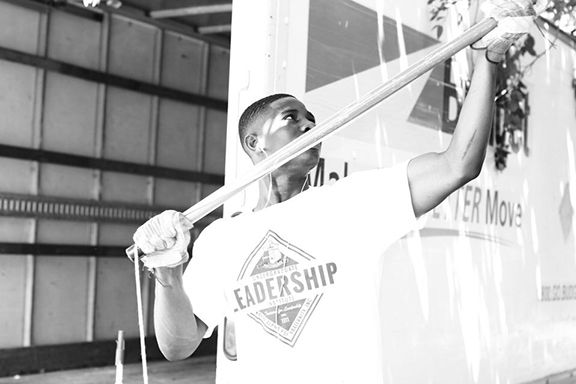 Clinton Asalu, who traveled to Atlanta to help build homes with Habitat for Humanity, said that community service experiences have a dual benefit of helping those in need and enhancing career goals.

HARRISBURG, Pa. — Penn State Harrisburg students have a passion for giving back to the community. While organizations and clubs are required to complete at least a couple of community service projects a semester, students go above and beyond that requirement, giving their time to senior citizens, elementary and secondary school students, children suffering from cancer, shelters, soup kitchens, hospitals and much more.

From student clubs and Greek organizations, to student athletes, to individuals, philanthropy thrives at Penn State Harrisburg. Students travel throughout the region touching lives, growing their résumés, and solidifying a commitment to serving the community.

TaLisa Ramos, assistant director in the Office of Student Engagement, said that while Penn State Harrisburg has a history of connecting to the community, lately students want to get even more involved in service.

“Our students are proactively doing community service on their own,” Ramos said. “Clubs are also reaching out to us to see if there is a need for volunteers, and we ask groups what they would like to do, or if there is an issue they want to support. We recognize the great work our student organizations are doing and we hope it inspires others.”

Students are matched with local organizations who have contacted the office requesting volunteers. The office also posts opportunities to its Facebook page. “The response is overwhelming,” Ramos said. “The students are open to diverse and different opportunities.”

“We want students to get engaged,” she added. “That is where the experiential affects the work they do in the future. It shapes the professional they will become. That is the culture we want to promote at Penn State Harrisburg.”

Connecting with the oldest and youngest community members

Community service helps students reach a wide spectrum of individuals, from the elderly to the young.

Sigma Alpha Epsilon fraternity spends many weekends with senior citizens at the Middletown Home near campus, where they read, play games, and talk with the residents. Kappa Alpha Psi fraternity visits local high schools to talk about academic achievement and to teach young men and boys life skills, like how to tie a tie. They also read to preschoolers.

“That we are able to just touch a life [is rewarding],” said Clinton Asalu, a Kappa member. “Something as simple as teaching a middle school or high school student how to tie a tie can be life changing. When it’s time for that first job or interview, that tie, that professionalism, could be the difference between them getting that job or not.”

The Homework Club, which meets at St. Peter’s Lutheran Church in Middletown, began as a way to assist refugee students who had no after-school support. During the first hour, Penn State Harrisburg students assist elementary students with homework and language. The second hour is reserved for socializing and mentorship. The campus Latino Club is also involved in mentoring and tutoring English as a second language students in the Harrisburg School District.

For its first community service project, the Penn State Harrisburg Chapter of the National Criminal Justice Honor Society, known as Alpha Phi Sigma, collaborated with the Middletown Police Department on “Operation Tactical Teddy Bear,” a drive to collect stuffed animals for officers to use while on calls that involve children.

“Alpha Phi Sigma believed that the ‘Tactical Teddy Bear’ toy drive was important because it was about more than just collecting stuffed animals. It was about innocent children who unfortunately get caught up in very real situations,” said Michael Imbrogno, vice president of Alpha Phi Sigma. “The officers of the Middletown Police Department can hand these stuffed animals to children who might be affected by a situation going on around them. This not only calms the child, but also helps their parents relax and lowers the overall stress level of the whole situation.”

Imbrogno added that the collection not only allowed local police and the campus to interact, but also showed the community that Penn State Harrisburg cares about the people of Middletown and “more important, that we want to make a difference and help improve the community.”

Reaching out to those most in need

Community service performed by Penn State Harrisburg students also focuses on giving back to those most in need — the homeless and the sick.

The Greek Life Council, the Caribbean Student Union and the Black Student Union are among the organizations who have volunteered at soup kitchens in Harrisburg.

“We try to go big on community service,” said Shamar Wiltshire, a member of Kappa and the Greek Life Council. “We reach out to local shelters and the community to give out food or clothing. We carry one goal — to serve.”

Early in the fall semester, Harrisburg Benefiting THON joined with the Office of Student Engagement to create Little Lion Care Packages for pediatric hospital patients. The entire campus community was invited to join in, creating and filling bags with coloring books, crayons and other fun activity items, along with messages of support and encouragement for the children.

Student athletes in the community

The Student Athlete Advisory Committee (SAAC), a liaison between the college administration and student athletes, includes a community service committee. Past projects have included volunteering at the Bethesda Mission, a homeless shelter in Harrisburg, collecting and distributing toiletries.

“Community service is important,” said Sephora Senestant, cross-country team member. “As a student athlete, we have the academic base and the athletic base, but to be hands-on in the community gives you another support system. Not only do we have our teammates as support, we also now have the surrounding community as well.”

SAAC is currently holding a water and food drive for communities affected by the recent devastating hurricanes and flooding nationwide and in the Caribbean, as well as for local organizations in need, including the Boys and Girls Club in Harrisburg.

“When students give back in the local communities, it helps them to see how diverse the region is in terms of the people, socioeconomic backgrounds, and ethnicities,” said Danielle Lynch, head track and field and cross country coach and SAAC adviser. “It is one thing to collect items; it’s an entirely other experience actually handing it to the person in need and seeing how they receive the gesture. I think it is a transformative experience for the student athletes.”

The athletes agree that community service is a necessary part of the college experience that connects them to the community where they live and study. “When you give back to the community, it reconnects you to the people who support you,” said Sharai Taylor, a member of the track team.

“Helping people in need is the number one thing to make a student athlete successful,” said Ashley Williams, track team member. “It’s not always about athletics; it’s about giving back and not forgetting where you came from.”

Enhancing the college experience and the future

Students also see the importance of volunteering and community service to their college experience and future careers.

“It gives you a better impression of who you are, as you learn more about yourself,” said Wiltshire. “When you are involved, it’s one more step to being better-rounded and building up yourself in the work field.”

“College students should definitely get into that volunteering mind,” Asalu agreed. “You are gaining that sense of, ‘I did something to help someone change their life. I learned a skill I didn’t have.’” Asalu, who traveled to Atlanta, Georgia, with fellow fraternity members to build homes with Habitat for Humanity as part of the Kappa Alpha Psi Undergraduate Leadership Institute, said that these experiences have a dual benefit of helping those in need and enhancing career goals.

Asalu added that while doing a good deed, you gain skills that can help you in your future career. “I helped give a family a place to live while learning to build a fence,” Asalu said. “So not only did I do something good for somebody, which is heartwarming, but I also learned skills that I could possibly put on my résumé. It makes you a well-rounded person.”