MIDDLETOWN, Pa. – For David Witwer, American studies professor at Penn State Harrisburg, a key takeaway for students studying history is understanding how parts of history are selected and chosen to be remembered while other parts are left to be forgotten.

One way he does this is through hands-on experience. 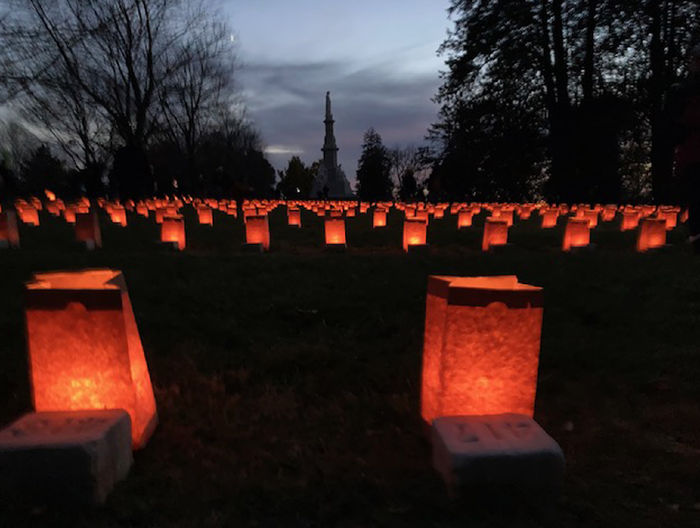 Students in Witwer's class helped set up luminary candles on the graves of Civil War Soldiers as part of Remembrance Day.

Remembrance Day, which began around the 1930s, has been an important part of Gettysburg’s history and tourism. Spectators and reenactors come from all over the country to see and participate in the day’s festivities. To get his students involved, Witwer worked with The Gettysburg Foundation, a nonprofit organization that joins with the National Park Service to preserve Gettysburg National Military Park and the Eisenhower National Historic Site and to educate the public about their significance.

Students assisted in setting up the illumination ceremony – which features a luminary candle on all 3,512 Civil War soldiers’ graves – that occurred just after sunset and attended the parade earlier in the day to watch reenactors perform.

"There was a small group of us from Penn State Harrisburg, so that was a lot of fun, getting to be a part of the whole larger setup,” said Gabrielle Brassart, a senior majoring in public policy.

Throughout the semester, the students went to Gettysburg several times to visit the historic sites. They learned about the history of Gettysburg, the Battle of Gettysburg and how it fit into the larger context of the Civil War, and the contested memory of the Civil War with the recent debate on what the Confederate monuments stand for. The class also discussed how the town of Gettysburg evolved from a small rural town to a national tourist site. In the other trips to Gettysburg, the students set up a new children’s organization, volunteered to preserve buildings, and went on tours.

Brassart said she comes from “a family full of veterans and military enthusiasts in general,” who often talk about the military aspects of war, but not much about what personal experiences might have been like. “(It) was really cool learning about it in class but then also talking to people in Gettysburg about (what is remembered) and their personal involvement with reenactment,” she said.