From teacher to engineer and back again 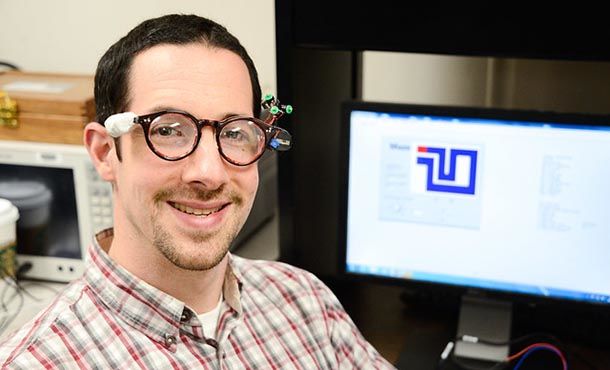 UNIVERSITY PARK, Pa. — When Philip Graybill received his degree in music education in 2005, he never could have predicted that his career path would lead him to a doctorate in engineering. But 14 years later, as a doctoral candidate in Penn State’s electrical engineering department, Graybill has found a new application for his education background, as his passion for and experience in teaching have led him to receive the 2019 Harold F. Martin Graduate Assistant Outstanding Teaching Award.

The award, which recognizes graduate assistants for outstanding teaching performance, according to Penn State’s website, is sponsored jointly by the Graduate School and the Office of the Vice President and Dean for Undergraduate Education. Graybill was one of 10 recipients of this award across the University.

After receiving his bachelor’s degree in music education, Graybill worked for several years as a quality assurance professional in Mechanicsburg, Pennsylvania. As he thought about his professional future, he said he was drawn toward engineering because of his lifelong interest in math and science, as well as the excellent career opportunities.

Graybill decided on Penn State Harrisburg because of its convenient location, affordable price tag and great reputation. After one year, he transferred to Penn State University Park, entering the Schreyer Honors College as a gateway student as he worked toward a bachelor’s degree in electrical engineering and, after that, toward his doctorate degree. Throughout his studies, which confirmed his passion for engineering, Graybill said he never lost his original interest in teaching.

“I initially went toward engineering with a professional thought, imagining I’d work in industry as a professional engineer,” said Graybill. “But as I went through my degree program, I realized I actually do like the teaching part of it, and if I could teach at a college or small university, that’d be ideal.”

The desire to teach at the college level is what motivated Graybill to earn his doctorate degree. After considering an offer from another university, Graybill decided to stay at Penn State for his final degree.

“It’s nice to be close to my family, but also, I love State College, and I love the environment here in the electrical engineering department,” said Graybill. “When I walk into EE West, I just feel like there are people here who are down-to-earth and care about you. They’re smart and friendly, and the culture here is just really a good one.”

Because Graybill had a graduate teaching assistantship, he was given further opportunities to hone his teaching abilities and confirm his chosen career.

“I think what I enjoy most about teaching is the people, and the interpersonal aspect of it,” he said. “You have students that come to you distraught and frustrated and they leave — hopefully — happy and relieved. And just helping them to achieve that change, either through translating information, or helping them see the problem more clearly or helping them to understand what they don’t understand, is what I find the most satisfying.”

Graybill’s pedagogical background and experience prior to entering the field of engineering has helped to shape his teaching philosophy.

“When I was teaching music theory and sight-singing, all 10 of my students could sight-sing on tune, except for one student in the corner who was always off-key,” Graybill said. “One day, we had a sight-singing exam where they had to sing individually. This particular student came into the office for his sight-singing exam, got his melody, I gave him the starting pitch, and he sang it perfectly, but down a fourth. He sang it in a different key, but the right melody. He knew how to sight-sing but his range was lower, and I never knew that. This student was learning and he could do it, but I wasn’t assessing him correctly or giving him the right opportunity to express his knowledge.”

Graybill credits that experience as shaping his view on teaching, along with advice from his own teachers.

“One of my mentors in my first degree is a choral director and conductor,” Graybill said. “She said that the art of choral conducting and directing is finding 10 different ways of saying the same thing. And I think that’s true of teaching as well. You have to find the one that clicks for a particular student.”

Communicating clearly and being approachable are other qualities that Graybill values and incorporates into his role as an educator.

“I really try to listen to students and to have them explain what they do understand so I can figure out what their misconceptions are and help correct their understanding,” said Graybill. “In a circuits lab, it’s always tempting to fix the students’ circuit for them, but I really try to have them think about what might be wrong with the circuit and place it back in their hands, because in engineering, they’re going to be responsible for fixing their own problems.”

Graybill’s professional success is not limited to this teaching accolade. He has received numerous merit-based scholarships and awards during his time at Penn State, including a University Graduate Fellowship; Evan Pugh Senior Scholar Award; Dr. John Brown, Jr. Scholarship; Madden Honors Scholarship; Harold I. Tarpley Memorial Scholarship; and the Class of 1922 Memorial Scholarship.

Graybill, whose research interests lie primarily in the field of biomedical devices, has participated in research at Los Alamos National Lab in New Mexico and at Chonbuk National University in Jeonju, South Korea. At Penn State, he has conducted research in the labs of Mehdi Kiani, the Dorothy Quiggle Assistant Professor of Electrical Engineering, and Bruce Gluckman, professor of engineering science and mechanics.

In Kiani’s lab, Graybill developed a pair of glasses that uses inductive sensing to allow people with disabilities to control a computer, wheelchair or any other electronic device. For his newer research project, Graybill is using statistical computations on electronic hardware in order to infer information about animals’ brains that cannot otherwise be measured.

“The ultimate plan is then to use that information to offer feedback, initially with respect to epilepsy,” explained Graybill. “The idea is that if you can track what is happening in different parts of the brain and detect when a seizure occurs, we could maybe see what’s going wrong and then learn about epilepsy.”

When considering what advice he might give to students considering the field of electrical engineering, Graybill said, “Having a good imagination and a good background in math is really helpful, but you don’t have to have your own soldering iron or have designed your own robots before you come in. Electrical engineering is open to anyone who’s able and willing to learn.”