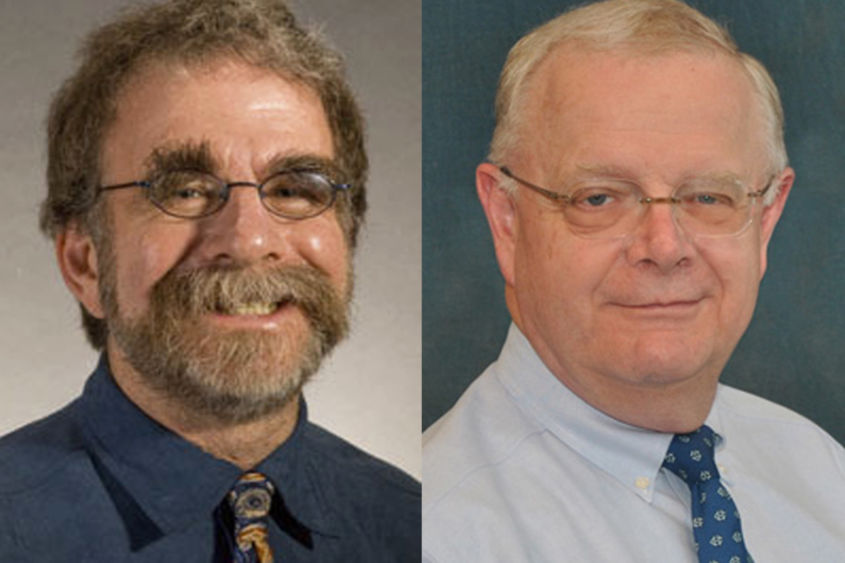 HARRISBURG, Pa. — Penn State Harrisburg faculty members Glen A. Mazis, professor of humanities and philosophy, and Richard Young, professor of supply chain management, have been named distinguished professors by the Penn State Office of the Vice Provost for Academic Affairs.

The title of distinguished professor recognizes a select group of professors who have achieved exceptional accomplishments in teaching, research and service.

Mazis is on the board of the International Merleau-Ponty Association, the editorial board of “Environment, Space, Place,” president of the Marietta Borough Council, president-elect of the Penn State Harrisburg Faculty Senate. His poetry has appeared in more than 75 literary journals, including “Rosebud,” “The North American Review,” “Sou'wester,” “Spoon River Poetry Review,” “Willow Review,” “The Atlanta Review,” and “Ashville Poetry Review,” as well as in a collection of poetry, “The River Bends in Time.”

Young joined Penn State in 1997 and transferred to Penn State Harrisburg in 2004. He has 19 years of corporate experience including various logistics-related managerial posts in the chemical and pharmaceutical industries. He is a fellow of the Chartered Institute of Logistics and Transport of the United Kingdom, was a 2003 Fulbright German Studies Research Scholar in Berlin, and was a member of a panel advising the Joint Chiefs of Staff on improved supply chain processes for the U.S. military.

An active publisher, he is a member of the editorial boards of several journals and is an affiliate research associate at Penn State's Center for Supply Chain Research. He is the recipient of many distinctions and awards, the most recent being the Distinguished Educator Award from the National Defense Transportation Association.  He is co-author of the book, “Railway Security: Protecting Against Manmade and Natural Disasters,” published in 2017.

His interests and expertise include understanding the Supply Chain Operational Reference (SCOR) Model, segmenting supply markets, landed cost analysis, and protecting supply chain infrastructure.  His professional affiliations include the American Society of Transportation and Logistics, the Institute for Supply Management, the Chartered Institute of Logistics and Transport, the National Defense Transportation Association, and the International Society for Preparedness, Resilience, and Security.

Distinguished professor designees must be acknowledged leaders in their fields of research or creative activity; have demonstrated significant leadership in raising the University standards with respect to teaching, research or creative activity and service; and have demonstrated excellent teaching skills and contributed significantly to the education of students who subsequently have achieved recognition of excellence in their fields.