Streamed LIVE
from the stage of the Kulkarni Theatre
March 18th, 2021 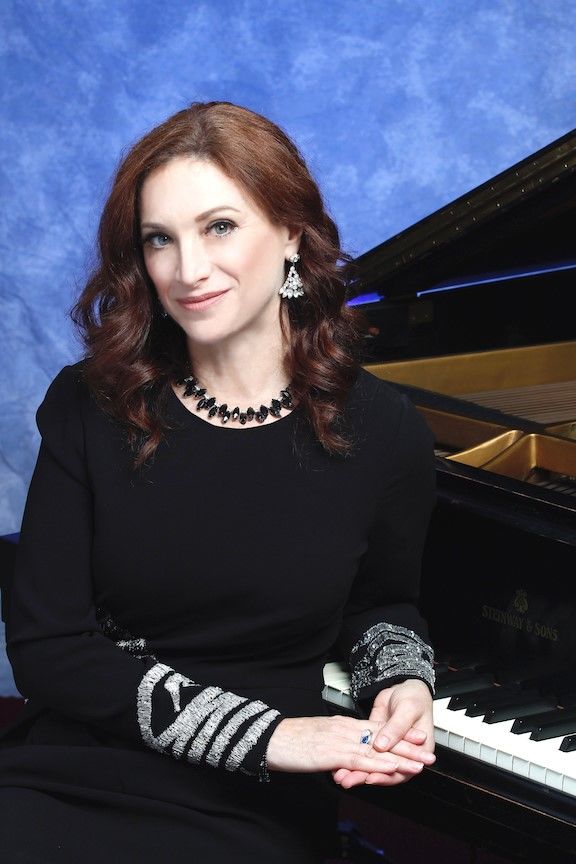 About The Artist: Robin Spielberg

“Music smoothes the rough edges of life,” says Robin Spielberg in a recent interview. “It speaks to us when words fail, and expresses our deepest emotions.”Ms. Spielberg discovered her passion for music as a youth and began formal piano lessons at the age of 7. By the time she turned 10, she had composed more than 50 original songs.

Growing up just outside of New York City, Spielberg often frequented the Broadway theater district with her family. Her love for the American Musical inspired her as a youth to arrange popular American songs from theater and film alongside her classical training. With interests in both theater and music, Spielberg earned a B.F.A. in drama from New York University. As a founding member of the Atlantic Theater Company, she has acted in dozens of off- Broadway plays, radio dramas, and composed several original scores while building a career as one of the premiere piano performers in New York. It was in these Manhattan piano rooms that Spielberg debuted her original piano solos.

Spielberg began her concert career in 1996. Audiences returned again and again to hear Spielberg’s unique arrangements and original music. Her Carnegie Hall debut was a sold-out performance at the Weill Recital Hall in 1997 and she has been a headline performer in the hall twice since.
Robin Spielberg has been hailed as one of America’s most popular contemporary female pianists/ composers and has been featured in live performances on such programs as; “The Soul of Christmas: A Celtic Music Celebration with Thomas Moore” and “The Great American Ballroom Challenge” on PBS, CBS Saturday Morning, ABC News, Lifetime Live, and NPR. Spielberg’s has toured South Korea making concert appearances at the renowned Seoul Arts Center, LG Arts Center and KBS Hall. Recently, South Korea’s Airiang TV recorded a full concert of Spielberg and broadcast it throughout Asia.
Spielberg’s music has now been heard by over 80 million listeners on Pandora and has had hundreds of millions of plays on Apple Music and Spotify. As her popularity continues to skyrocket, Spotify has now created a ‘Robin Spielberg Spotify Playlist’.
Spielberg, recently released “Re-Inventions,” her 20th album, and it is in the top 1% of artists played on Pandora Radio, the internet’s largest radio station. In addition to over 200 million streams on that platform, she has over 240,000 monthly listeners on Spotify and has sold over a million physical CDs of her piano-centric music.

Known for her expressive touch at the piano, melodic original compositions and unique arrangements of covers, Spielberg’s newest recording contains original arrangements of classical masterpieces by Mozart, Beethoven, Chopin, Strauss, Schumann, Schubert, Brahms and more.
Spielberg’s music has been heard on the History Channel and several national documentaries. Her music has served as the soundtrack for both the 2013 and 2014 Lantos Human Rights Prize videos as part of the awards presented to both Hilary Clinton and Shimon Peres.
In the field of dance, ballroom waltzes were choreographed to her pieces, “Walk with Me” and “A Song for Jennie” on PBS’s “Great American Ballroom Challenge." University ballroom teams have toured with her work, and international ballroom competitions have utilized her music for the compulsory waltz portion of competitions, including the Copenhagen and Tokyo Open.

Spielberg’s memoir, “Naked on the Bench: My Adventures in Pianoland,” won Gold Medal in the Reader’s Favorite International Book Award contest. In it, she demystifies the life of a touring artist with humor, and a dose of the sometimes-harsh realities of life on the road. Praised as a “must read” for anyone going into the arts by the Kirkus Review, The author self-narrates the audiobook found on iTunes and audible.com with warmth and wit.
In addition to her multi-faceted work in music, Robin Spielberg is a Celebrity Spokesperson for the American Music Therapy Association. Spielberg’s interest in the connection between music and healing synergized when she witnessed the positive effect music had on her own baby when born prematurely and the difference music made during her 4-month stay in the neo-natal intensive care unit. The release “Beautiful Dreamer” was the result of this experience, a recording of lullabies and songs on solo piano for the parent and child.

Spielberg’s work with music and wellness has been covered by The New York Times and in segments on LifeTime Live and ABC News. Her popular TEDx TALK on music and wellness has had over 87,000 views and has resulted in lectures and workshops in schools, hospitals, community centers, nursing care facilities and performing arts centers nation-wide. Major institutions who have presented these sessions include; The Mayo Clinic, Eastern Tennessee State University, Fergus Fall Arts Center, Saint Joseph College, Castleton State College, The Kerr Cultural Center, and the Pennsylvania Psychological Association. Spielberg donates $1 from the sale of each release to the national music therapy research.

Spielberg resides in rural Pennsylvania with her husband/business partner, and their teenaged daughter. For more information visit her website. Robin Spielberg is represented by Kosson Talent