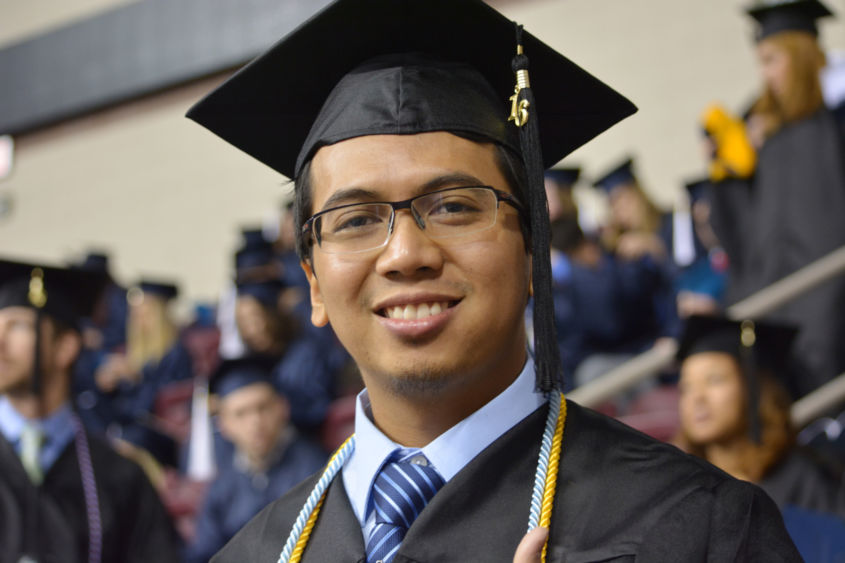 Danang Endrayana Syeh Qodir received his master’s of public administration from the Penn State Harrisburg School of Public Affairs at the college’s fall 2016 commencement on Saturday, December 17.  Qodir, who traveled from Indonesia to study at Penn State Harrisburg, said that completing his studies as an international student came with challenges and rewards.

“It was hard to live far away from my home country and families, and to deal with the different languages, foods, weather, and cultures, but the faculty and staff at Penn State Harrisburg helped me to go through these two years smoothly,” Qodir said.  “As a student from the country with the largest Muslim population in the world, I did not find any difficulties in practicing my religious activities as a Muslim student at Penn State Harrisburg because the campus offers a praying room. Campus neighborhood areas are also safe and the people are friendly and welcoming to students.”

To help him adjust to his new environment, he joined several campus activities, such as the American Society for Public Administration, the Penn State Harrisburg Chapter of Pi Alpha Alpha, the National Honor Society of Public Affairs and Administration, and Penn State Harrisburg’s Muslim Students Association. He was also part of the winning team of the Capital Region Site NASPAA 2016 Global Student Competition and presented his research at the University’s 2016 Graduate Exhibition and the 2016 Northeast Conference on Public Administration.

“Penn State Harrisburg fully supports student growth and development of their skills and knowledge inside and outside the class.  The master of public administration program offered me skills, knowledge, and tools through a blend of both practitioner and academic perspective. Through research, internship opportunities, and excellent faculty, this program allowed me to develop qualities that are very useful to pursuing my further career in the public sector as a manager and policy analyst.”

Qodir plans to return to the Ministry of Finance of the Republic of Indonesia, where he has been working for five years, to implement what he has learned at Penn State Harrisburg. “There is no doubt in my mind that I will be able to make a positive contribution to the improvement of my institution and my country,” he added.

As an international student, Qodir said that he was very impressed with the service provided by the Learning Center to help him overcome any academic issues that he had. He also credits the staff in the International Student Support Service office who helped him adapt to the new environment and helped him find many friends and families in the U.S.

"I feel at home here,” Qodir said. “I have mixed feelings now that I am about to graduate because I have tons of memorable stories...I am counting down the days for my commencement ceremony and I am ready to implement all the knowledge and skills I got from Penn State. I realize that commencement means the new episode of life has just begun. I still have to deal with many challenges and I hope I can maximize my membership in the Penn State Alumni Association to make a better world, because…We are…Penn State!”