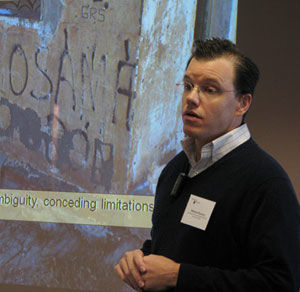 The center point of Assistant Professor of Political Science and Public Policy Michael Kenney´s scholarly investigations is, simply put, to learn how terrorists learn. That research has taken him to Israel and California and will next find him in Spain and England studying how Islamic extremists share and create knowledge and experience.

Dr. Kenney has received a $150,000 grant from the National Institute of Justice, the research, development, and evaluation agency of the U.S. Justice Department, "to increase our understanding of how Islamic militants learn" through studies of extremist networks in Spain and the United Kingdom — two critical theaters in the war on terrorism.

"Several years into the war on terrorism, federal, state, and local law enforcement agencies continue to confront agile adversaries who learn from experience and adjust their organizational structures and activities accordingly. Indeed, the extremist groups that carried out the Madrid train bombings in 2004 and the London train and bus bombings in 2005 demonstrate that one not be a card-carrying member of al-Qaeda to execute attacks of devastating lethality," Dr. Kenney concludes.

Dr. Kenney´s investigation will include interviews with government counter-terrorism officials and others. The data collected will be supplemented by other sources, including government documents, media reports, and academic studies on terrorism learning.

"While international in scope," Dr. Kenney points out, "this research has direct implications for criminal justice policy and practice in the United States. By increasing our understanding of the organization learning process undertaken by Islamist networks in Europe, the research could prevent terrorist attacks against the United States."

Previously, Dr. Kenney visited Israel through a fellowship from the Foundation for the Defense of Democracy for an intensive course in terrorism studies, and in particular how democracies can defeat the worldwide terrorist threat. The foundation, a nonpartisan policy institute headquartered in Washington, D.C., supported his travel to Israel in May 2005.

He was also one of eight scholars from across the nation to be awarded 2004-05 multidisciplinary fellowships to investigate ways governments and agencies can be organized to respond more effectively to terrorism.

The Organizational Learning and Homeland Security Fellowship, based at Stanford University´s Center for International Security and Cooperation, was part of a $1.65 million contract from the Department of Homeland Security. As part of the fellowship, Dr. Kenney examined competitive learning in terms of strategic interaction between terrorists and counter-terrorists, and how each party tries to learn from vulnerabilities exposed in public emergencies.

Dr. Kenney earned his Ph.D. in Political Science from the University of Florida in May 2002. During the 2002-03 academic year, he held a postdoctoral research fellowship from the Center for International Studies at the University of Southern California. Previous to that, he was a Hamburg Fellow at the Stanford center. He joined the faculty in the School of Public Affairs at Penn State Harrisburg in fall 2003.

His forthcoming book, From Pablo to Osama: Trafficking and Terrorist Networks, Government Bureaucracies and Competitive Adaptation, will be published by the Pennsylvania State University Press in the spring of 2007.